Symond’s Yat A place very fitting of a memorial.

Henry V is writ large in the annals of Courtfield Estate on the Welsh Bicknor bank of the River Wye.
This month we are setting off from Herefordshire’s most iconic viewpoint as a taster for the June 9th unveiling of a memorial in that same area. Where Prince Harry first drew bow and arrow, the names of Alan Dower Blumlein and his ten colleagues will soon also be writ large.
After setting a course from Yat Rock through tree-dappled sunlight, the Wye Valley trail beckons us down and along a beautiful stretch of footpath. We reach the old Ross and Monmouth Railway embankment near to an old tunnel which burrowed 433 yards to Symond’s Yat from a point where the Wye still has three miles to go to get there.
If not the setting for archery, this side of the river was the domain of the bullet – “The Monmouth Bullet” on its 13 mile 10 chain journey. Towards Kerne Bridge and Ross, another tunnel served the bridge to Lydbrook station by the old Edison Swan works where Pipeline Under The Ocean (PLUTO) was partly produced to fuel the D-Day Landings.
It was from this southern side of the river on 7th June, 1942, that the stricken Halifax V9977, returning from the Severn Estuary via the Forest of Dean and English Bicknor, approached Welsh Bicknor. The pilot, Douglas John Davies Berrington, was seeking an emergency landing in the flat area somewhere on the other side of Coppet Hill towards Goodrich Castle. In the event, the modified plane just managed to clear the treetops of Common Grove Hill – which we visit on our walk. As the aircraft crossed the Wye, very close to a line marked by a modern fishermens’ hut, its starboard wing became detached from the fuselage. At that point the aircraft rolled over on to its back and dropped almost vertically down into the field which is known as Tent Bank. An imposing oak tree stands sentinel just above the exact location. 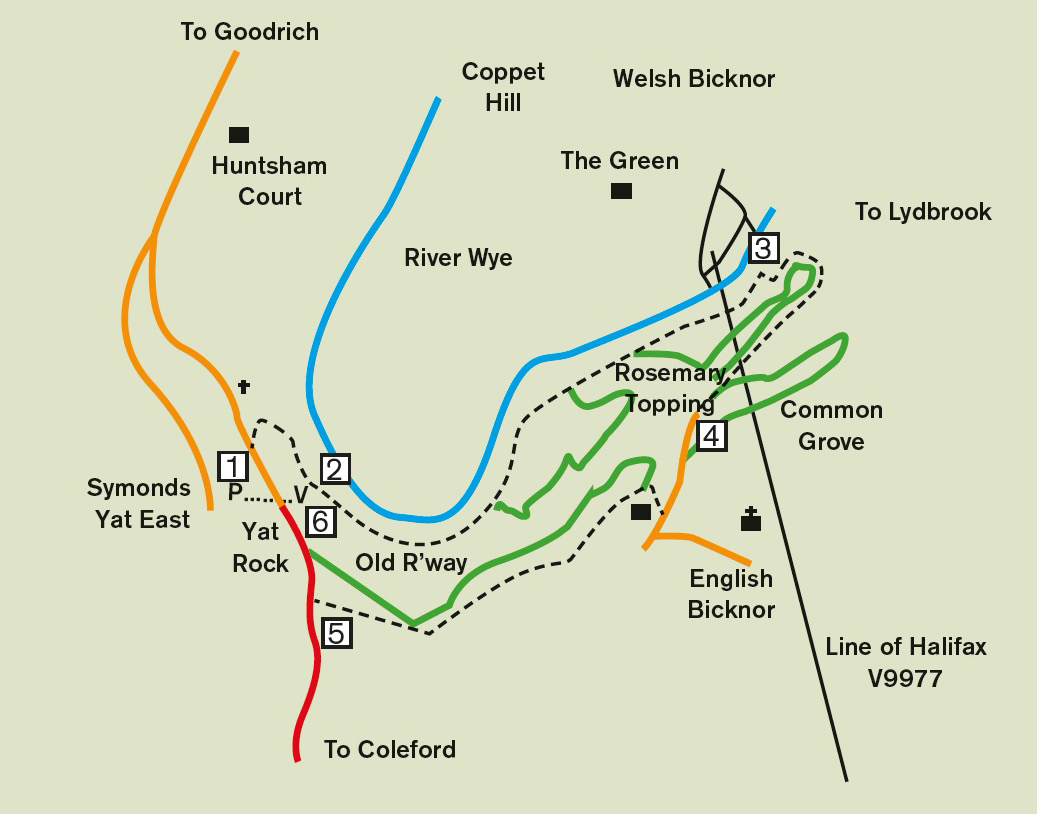 Knowledge is slowly gathering that 38-year-old Alan Dower Blumlein, the great electronics engineer and inventor of stereo sound, was one of those on board. The men were testing H2S airborne radar equipment to be deployed against land targets and German U-boats. The project had been conceived when EMI and the Telecommunications Research Establishment got together at Defford near Malvern. The team was led by radio astronomer Bernard Lovell, later to become Sir Bernard, of Jodrell Bank fame. Lovell himself had been an observer on board the plane only the previous day. The four scientists who perished – Geoffrey Spencer Hensby, Frank Blythen, Cecil Oswald Browne and Blumlein – had become Lovell’s personal friends – united in their determination to produce the instruments to defeat Hitler. Anguish at the deaths of the eleven young men and the pain inflicted on their loved ones would haunt Lovell for the rest of his life.
The main viewpoint at Yat Rock, famous for its raptors and the familiar view up the Wye, has become the very embodiment of Outstanding Natural Beauty in Herefordshire.
Indeed, Doreen Blumlein, Alan’s widow was moved to say in the 1980s:
“If you have to die, this is a beautiful place.”
When we have visited the fateful area just a mile and a bit upstream and returned to the Rock, we can be mindful of the “slings and arrows of outrageous fortune”; somehow the cavity magnetron crucial to the radar was retrieved from the plane crash debris and the vital system was put into production in January, 1943.
“Every subject’s duty is the king’s; but every subject’s soul is his own”. (Henry V Act IV, Scene 1, the English camp at Agincourt.)

The Route
1. Symonds Yat Rock, car park, disabled bay and toilets area. Amid birdsong, head gently up the surfaced path signed towards (but not to) the (main) viewpoint. Immediately behind Forestry Commission log cabin, TL down to balcony for view to Symonds Yat. Come back up and take steps down to left on Highmeadow Trail. After a couple of flights, TR to the road. Descend past the Old School House and, by Cliffe Cottage, bear R as if for “Welsh Bicknor 2½”. Zig-zag past Wren’s Nest quite steeply down to reach the old Ross-Monmouth Railway track bed, next to the Wye.
2. Old Railway/Wye Valley Walk. TL, 75m, for a view of the old tunnel which took a 433 yard course under Yat Rock to Symonds Yat. Return and follow the wonderful path, by k-gate and conifer edge, between grass banks, through gate, for 1½ miles.
3. Fishermans’hut. 60m beyond gate, go down 11 steps (L), through gate, by hut. (Here, you are very close to the line of Halifax V9977, on 7th June, 1942. The starboard wing detached over the river and the main body crashed on Tent Bank, opposite, below the prominent oak tree.) When ready, go back up steps to resume your original direction NE. At gate/stile, TR steeply up bank. Follow field perimeter R, L, R past waymarked tree, to obvious farm track. TR, over stile, up lower R edge of two long narrow pastures. At end, R of corrugated sheds, go through Heritage Trail gate.
4. Rosemary Topping. Now strike up the lane past the English Bicknor Parish Council board. Careful: 40m before road junction, look out for footpath sign and turn sharp R up into trees. Climb up the L edge of the grove and go through 3 gates to the right of Bicknor Court farm. Go straight up the track beyond. Bear R at end of paddock, through gate, and under fine trees. Swing R up track, favouring R edge of big pasture, then stiffly over brow to L edge. Cross stile to road.
5. Wood Lea. TR past cottages to Symonds Yat Rock. Follow pavement to point just before f/bridge crossing your road. Go up path to Main Viewpoint at Raptors notice board. (The crash site is one mile away, half right, north east.) Return and TR over f/bridge to start point. The view from Symond’s Yat Rock towards the Halifax V9977 crash site at Welsh Bicknor. An oak stands sentinel over the crash site, from south of the River Wye.

This site uses Akismet to reduce spam. Learn how your comment data is processed.